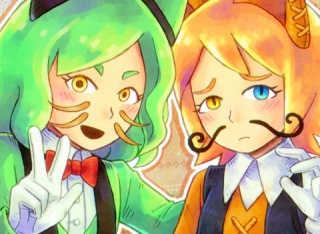 2022.02.25 19:58
大橋葦切はFANBOXを始めた
https://yskr084.tuna.be/
＞TFさん
一人で装備全種類コンプリートとかそういうのはプレイヤー個人がやり込みとして勝手に挑戦するようなことで、ゲーム側でクエストとして用意されると面倒に感じますね……（私はやってないです）
じゃあ次は全員戦車でぜひ（嘘です）
プランクは最近はなんとかなってますが参考にします。マウンテンクライマーはそもそもキツいので封印してます……ｗ
2022.02.25 07:43
TF
Now that you say it, I had to check the badges in the game... No, I haven't collected all of them yet! w
Collecting all clothing and armor for the same person and level up all jobs for the same person and also give the same person all the food to raise their stats to +99 was not so much fun for me. Instead, I leveled up all 12 FPs + 12 of their grandchildren to LV 50 in their favourite job and distributed all the food between them, so maybe that counts? w
Completing the towers with different jobs is a good idea! By the way, so far I haven't even used the player-controlled Mii in the towers yet, so that might also be something to do. (someone who likes FPs/AIs too much) w
Team which won: Healer, Wizard, Thief and Knight (no player-controlled Mii, so it was a strategy of using sprinkles and safe spot wisely).

Something else: I remembered that you mentioned thatthe "plank" in Ring Fit Adventure made your ellbows hurt. I used a blanket before, but recently I found a better solution, so I just wanted to let you know. I bought a soft foam pad (25 x 5 x 40 cm). It's actually supposed to be for balancing on during Yoga exercises. But you can rest your arms on it during the "plank" and it really helps! And it's also very good to sit on during "boat pose" when the floor is too hard.
The only excercise I still haven't found a solution for is "mountain climber" (my feet always slip and hurt, even on a mat)...
2022.02.24 20:23
大橋葦切はFANBOXを始めた
https://yskr084.tuna.be/
＞TFさん
ありがとうございます！ カフェデートはNPCが結構反応してくれるのも含めて好きです！
えっもう勲章も全部取ったんですか！？
あとはなんだろう……変な職業で塔登るとか……ｗ（面白いかどうかはわかりませんが）
2022.02.23 19:33
TF
Those two look so cute! And I laughed a lot at the manga! w (really likes this Miitopia event)
It's always great to see your Miitopia Miis and seeing this immediately makes me want to play Miitopia again... But I already completed everything, so I don't know what do do in the game! (secretly wishing for an update with more quests and events) w